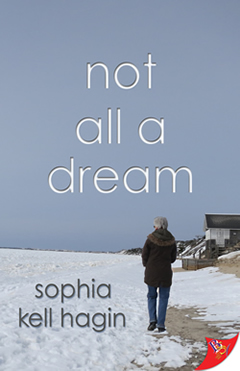 Read Chapter One
of Not All a Dream

Novels, that is. I write about sapphic women — particularly those human beings we still sometimes refer to as lesbians.

I do this because I believe that we very much need to rediscover the truth about ourselves before the outrageous delusions our culture perpetuates about us destroy the entire planet.

This is why I write survival stories — stories of struggle and resilience, stories of strength, hope, and, of course, love. My stories have been described as dystopian, to which I say: Hey, look around — real life is dystopian, and I'm merely being realistic as I explore what it takes to survive and to genuinely love. Especially if you're a woman. Especially if you're a lesbian.

My newest novel — Not All a Dream, which won a 2022 General Fiction award from the Golden Crown Literary Society — stays, for me, close to home, since the story takes place almost entirely in North Truro, Massachusetts, where I live, and begins right around now. So — this time I offer up present-tense rather than future-tense speculation about sapphic lives in these utterly strange times.

You can read Not All a Dream's back cover “blurb” here, and you can read the first chapter here.

In addition, I've posted the first chapters from my three earlier novels (the first of which won a Goldie, too) —

All of my novels, including Not All a Dream, are available from my publisher, Bold Strokes Books, as well as from any bookseller.

On this site I offer up some of my other stuff: